Ernakulam is one of the most developed districts of Kerala covering an area of 3068 sqkm and based in the heartland of the state. It is the commercial capital of the state yielding the highest revenue among all districts in Kerala. Having its headquarters based at Kakkanad, it has the biggest metropolitan region, Cochin in its geographical limitations. Formed on 1st April,1958, the district is one of the most visited place and records the highest number of tourist visit in the state. Filled with churches and temples, museums and scenic beauty, historical places to cosmopolitan areas, shopping zones to movie theaters, the district has it all attracting tourists and facilitating the inhabitants of the district in the best way. 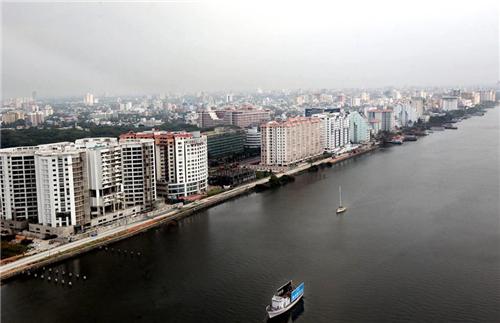 Ernakulam district has been divided into two revenue divisions Muvattupuzha and Fort Kochi and seven talukas comprising of Paravur, Aluva, Kochi, Muvattupuzha, Kunnathunad, Kanayannur and Kothamangalam under its administration. The district holds around 12%population of the whole state with the record of the first Indian district to have 100% literacy in 1990.

The name Ernakulam was derived from a Tamil word “Erayanarkulam” meaning the house of Lord Shiva.

The district provides distinctive historical significances which contribute to the attraction of the place. Referred as the “Queen of Arabian Sea” the place shows existence of rock cut caves and Dolmen-shaped monolithic monuments from Stone Age which proves the presence of human kind from those period. In ancient and medieval era the place was turned into a prime location for trade and commerce with various British, Dutch, Portuguese and Arab seafarers stopping at this location and conduct trading activities. While visiting the place one can still find the laden impressions of all this clans in the area.

Ernakulam was believed to be first ruled by the Chera Dynasty since a lot of interlinked historical facts has been established. Later on, however, it was the Kingdom of Cochin which took over the reign. It was the Maharaja of Cochin who showed the initiative of forming a town council in Ernakulam. It may be noted that at the beginning the district headquarters was based at Ernakulam from where the district got its name but later on the same was shifted to Kakkanad.

Located at the Western coastal plains of the country, this particular district remains surrounded by Idukki district in the east and Arabian Sea in the west, Thrissur district in the north and Alappuzha and Kottayam district in the southern part. The two major rivers in this area are the Periyar River and Muvattupuzha River. The district can be divided into well defined regions of lowland, midland and highland. The rich textures of the soil are responsible for the agricultural production as well as the lush greenery spread across.

Typically hot and warm climate prevails in Ernakulam during the summer months of March to June followed by heavy rainfall till September. The best season in Ernakulam is no doubt the winter season where the temperatures are quite soothing, cool and dry.

One of the strongest factors of Ernakulam is its economical contribution to the growth of the state. It is the leading commercial center of Kerala and the second richest district of the state after Trivandrum. The industrial business of the district has got a huge boost especially because of its geographical position which makes the communication with the district extremely easy. There are rail, air, water and road transportation which helps the traders conduct their business in a better way.

Fishery business is one of the primary businesses in Ernakulam. Due to its position by the sea coast both inland and marine fisheries are available here used not only for business purpose but also research and development. Agriculture is also a popular mode of business in the district. Especially the eastern part is considered as agrarian with rice as the major crop cultivated here. Nutmeg and Pineapple are also cultivated in a huge form with the latter holding 70% of the total production of the state. Another import plantation crop grown in huge form here is rubber making the district the second largest producer of the same. Apart from this Ernakulam also produces a lot of crops including banana, turmeric, black pepper and others.

Ernakulam is one such district which supports industrial development in a huge way. Several industries have found its way in the district like garments, furniture, paper products, chemical based companies, metal based companies, engineering units, rubber or plastic based companies, leather-based companies and many others. Some of the famous large scale companies having operation at Ernakulam district includes Hindustan Petroleum Company Ltd, HINDALCO, Hindustan Lever Ltd, Fertilizer and Chemicals Travencore Ltd, Bharat Petroleum Company Limited,Nadukara Agro Processing Vazhakulam, Transformers and Electrical Kerala Limited., Kerala Electricals And Allied Engineering Company Ltd and many others.

Apart from this various medium and small-scale industries also exist in the district with profitable growth which in turn helps the growth of the district and the state. Export Industry is also quite strong in this area with too many products beings exported to various parts of the world. Some of the major exporting products are Sea foods, marine foods, cargo, Software Solutions, Rubber gloves, spices and insecticides.

Places to Visit in Ernakulam

The district Ernakulam is the hub of Kerala, better known as ” God’s own country”, which makes it a perfect place to move around and enjoy the beauty and excellence of the land, One can visit and enjoy multiple number of entertaining places in Ernakulam and spend a great time here.

One of the best connected districts of the country, Ernakulam remains well facilitated with transportation services by air, rail, road and waterways. The district successfully establishes connection with most of the popular domestic and international destinations which also helps in promoting the growth and development of the place in multiple ways.