Ernakulam district is situated in the heartland of God’ Own Country, Kerala. It is one of the most integral parts of the state in almost every aspect. Be it tourism or commerce and trade, administration or facility, the district remains a major contributor in all. However, for being a splendid tourist destination the religious significance of the place has a huge part to play. The district has some of the famous and even oldest temples of the country located here. Millions of devotees every year visit the various temples of Ernakulam district and offer their prayers. Some of these temples are: 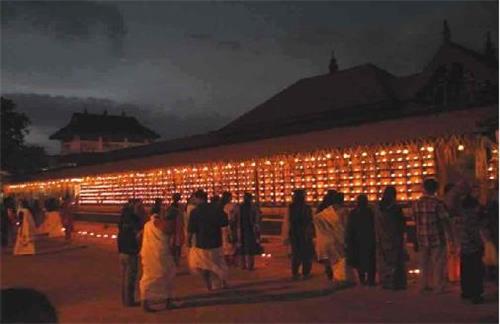 Aluva Sree Vamanamoorthy Temple
Close to Aluva Mahadev Temple in Thottakkattukara in Ernakulam district lays the ancient temple of Vamanamoorthy temple. It has much historical significance since it is stated to have the only Vamanamoorthy Temple where holy lockets and rings were found. A 21-day pooja is the biggest celebration conducted here.

Adi Shankara Janmabhumi Kshethram
Based in the pictorial town of Kalady and at a short distance from the Cochin International Airport lies the temple complex. It is a pious destination for people of almost all faiths. The various festivals celebrated here include Vinayaka Chathurthi, Sankara Jayanti, Mahapradosham, Navaratri, etc.

Ambadathu Malika Sree Ayyappa Sannidhanam
Close to the birthplace of Adi Sankara in Kalady lies the holy place known as Ambadathu Malika of Sree Ayyappa. The sacred place is famous for its safe custody of Mudravadi and Bhasma Sanchi, received by one devotee for more than one and half centuries.

Avanamkode Sree Saraswathi Temple
Located in Kalady, on the banks of River Periyar, this is one of the famous 108 temples of Goddess Durga. The main festival celebrated here is the Navratri Puja.

Ameda Temple
At a distance of 20km from Ernakulam district, on the southern side, beside Vembanad lake lies the beautiful Ameda Temple. Managed by Ameda Mangalam Family, this temple have a lot of stories in its establishment. The temple is dedicated to Lord Nagaraja and other snake gods.

Aluva Mahadeva Temple
About 2kms from Aluva in the beautiful Ernakulam district on the banks of River Periyar lies the pious temple of Lord Shiva. The beautiful temple is located in the midst of a tributary of River Periyar known as Mangalappuzha and River Periyar. The temple is looked after by Travancore Devaswom Board. Maha Shivratri, in the month of February and March, is the most celebrated festival here. Special prayers are recited that day.

Anchumana Temple
One of the holy shrines in Ernakulam is the Achumana Bhagavathy Temple. The most attractive feature of this temple is that 3 deities are worshipped here Sree Bhuvaneswary, mother of Universe, Sree Annapurneswary, mother of Food and Sree Bhadrakali, the God of Time according to Vedas. It is believed that without the blessings of them nothing is possible. The main event here is Para Purappadu on the 1stday of Vrischikam. Thousands of devotees come here to celebrate the occasion.

Chottanikara Bhagavathi Temple
Believed to be one of the most sacred places of the whole Kerala, this temple holds immense importance in the minds of devotees. The main deity of the temple is of Goddess Bhagvathi. Chottanikara Temple has the ritual of worshiping God in three major forms. In mornings, it remains Goddess Saraswathy, Lakshmi in afternoons and Goddess Durga in evenings. The wooden sculpture of this temple makes it worth visiting too. The deity here is often called as Devinarayana, Ammenarayana, Bhadrenarayana and Lakshminarayana also.

Chelamattam Sree Krishna Temple (Dakshina Kasi)
Another pious location is the beautiful temple of Sree Krishna in the Chelamattam village of Ernakulam district. Also famous with the name Dakshina Kasi, this temple is believed to have the holy footsteps of the sacred Guru, Jagadguru Sree Sankaracharya.

Desam Sree Anandapurath Mahavishnu Temple
Based in Aluva Taluk, on the northern banks of River Periyar, lies the beautiful temple of
Sree Anandapurath Mahavishnu temple in the small village of Desam. It is among the oldest temples of the state. The popular belief states Lord Parasuram installed the statue of Lord Vishnu, the main deity here. It is a popular historical place with ample stories related to its existence.

Elavoor Puthenkavu Temple
Located in Elavoor under the village Parakadavu in Ernakulam district, this famous temple has got a lot of attention due to Elavoor Thookam. The temple located here is dedicated to Goddess Durga and it attracts huge devotees every year.

Edappally Ganapathi Temple
Situated in Edappally, this Temple is one of the most important ones in the state. The deity served here is from the Edapally Royal family and every day members of the Royal family worship during the early hours of the day. It is stated that the Temple lies in the heart of Edappally Swaroopam facing the eastern side. Udayasthamana Pooja is one of the famous event here.

Elenjikkal Kavu Sree Bhuvaneswary Devi Temple
This Temple is one of the popular temples in Ernakulam district. Though the principal deity of the temple is Sree Bhuvaneshwary it is believed to have the soul of Bhadrakali, Durga and Saraswati.

Ernakulam Thirumala Devaswom
Established in 1727AD, this temple holds a special place in the hearts of the natives. Situated in MG Road, Ernakulam, this temple was constructed by Devaresa Prabhu with its principal diety Shri Ventachalapathy with other idols which include Hanuman, Ganapathy, Mahalaxmi and others. The temple here has a community hall and Kalyam Mandapam for several occasions. Aratt festival is celebrated in a huge way here attracting several devotees here.

Kallil Bhagavathy Temple
It is one of the famous cave temples located in Methala, Kerala. In the Kunnathunadu Taluk of Ernakulam district this temple is dedicated to Durgadevi. The idols of Lord Brahma and Shiva are cut from bigger rocks. Cut from a massive rock this temple has 120 steps which is also the prime attraction here.

Karppillikkavu Sree Mahadeva Temple
Situated in Manjapra Village this temple is considered as one of the 108 eminent Shiva temples of the country and one of the oldest one too. The existence of this temple is believed to be there before 2000 BC. Prominent festivals here are Kodiyattu, Valyavilakku and Arattu.

Moozhikulam Lakshmana Temple
Situated in Moozhikulam in the Aluva-Mala route in the Ernakulam district lies the pious Lakshmana Temple. The presiding deity of the temple is Lord Lakshmana. The temple has huge historical significance as it is one of the oldest temples aging more than 5000 years.

Paramara Bhagavathi Temple
Among the collection of historical temples Paramara Bhagavathi Temple has special significance due to the position of the deity facing to the north which was pretty rare. The position has much religious significance as believed by the natives. Even there are stories related to Goddess Bhagavati are quite popular and believed here. The temple remains open everyday from 4am to 10am and 5pm to 8pm.

Palluruthy Sree Bhavaneeswara Mahakshethram
Located in Palluruthy, Sree Bhavaneeswara Mahakshethram is a popular temple of the district. The sanctification was done in 1904 by Sree Narayana Guru Swamikal. The principal deity of the temple is Lord Shiva, as the name suggests and the main festival here is the ten-day-long Kshetram celebrated with huge devotees gathered here. This is also the first temple constructed by backward class people having Swarna Dhwajam.

Perandoor Bhaghavathy Temple
Among the famous 108 Durga temples present, Perandoor Bhaghavathy Temple is one located in the Elamakkara city of Ernakulam district. The idol of Goddess Durga is present here facing the eastern side of the temple. Among various festivals, Pooram is celebrated in a huge way with many devotees coming to offer their prayers. The temple remains open from 4am to 8:30pm.

Puthankulangara Siva Temple
Located in North Eroor region of Tripunthara in the Ernakulam district, this is one of the oldest temples of the region dedicated to Lord Shiva facing the eastern side. The temple remains open throughout the day and three pujas are conducted daily. Shivratri is celebrated grandly here.

Puthukkalavattam Siva Temple
Situated in Puthukkalavattam, this particular temple is dedicated to Lord Shiva, along with Goddess Bhagavathy and Lord Ganapati. The temple follows strict rituals and customs and offers prayers twice every day. Arrattu festival in the month of Dhanu is celebrated in a big way here.

Puzhakkarakkavu Devi Temple
As per the religious scripts, Puzhakkarakkavu temple is almost 2000 years old and the principal deity here was self originated or referred as 'Swayambhoo'. Located in Muvattupuzha this is one of sacred places of the town enchanting devotees irrespective of different caste and creed. The deity here is worshiped in three forms where in the morning it remains Shree Bhuvaneshwary, afternoon Goddess Durga, and Bhadrakali in the evening.

Thiruvairanikulam Mahadeva Temple
Located in the southern part of Aluva Taluk of Ernakulam district, Thiruvairanikulam Mahadeva Temple is one of the famous temples in the area. The principal deity of the temple is Lord Shiva and Goddess Parvati. While the idol of Shiva faces east, Parvati faces west. Another attracting feature of the temple is that only during the month of Dhanu the door to the shrine of Mata Parvati is opened for 12 days for the devotees. The rest of the year the same remains closed. One of the major festival here is Nadathurappu Mahothsavam which usually is celebrated in the end of December.

Thiruvumplavil Mahadeva Temple - Kerala Kashi
The Temple is located at Anicadu which is a small yet popular village in Muvattupuzha of Ernakulam district. This place has huge religious significance. It is believed that the temple is a holy shrine and doing Pithru Tharppanam here is equal to conducting the same at Kashi. Thousands of devotees gather to offer prayers at this temple during the festival of Maha Shivratri.

Thottuva Sree Dhanwanthari Moorthy Temple
Located in Perumbavoor- Kodanad route at a distance of a kilometer from Thottuva Junction lies the beautiful Thottuva Sree Dhanwanthari Moorthy Temple. Situated in the Koovapady Panchayat region of the Ernakulam district, this temple is much famous among the tourists specially for its impressive idol of Lord Dhanwanthiri which is almost 6 feet tall. Raw milk and butter are offered to the deity.

Thrikkakara Vamana Temple
Thrikkakara Vamana Temple is dedicated to Brahmin boy, Vamana, which is believed to be one of the ten incarnations of the greatest Lord Vishnu. The temple has inscriptions which dates back from 7th to 9th century CE. Onam is celebrated in a huge way for 10 days at this temple. It is considered one of the pious shrines of the 108 divine places.

Vaikkarakavu Sree Bhagavathi Temple
One of the ancient temples of Ernakulam district is the famous Sree Vaikkarakavu Bhagavathi temple situated in the small Vaikara Village located on the eastern side of Perumbavoor town. According to the natives the divine presence has been there for ages.

Vasudevapuram Sree Mahavishnu Temple
Maharshi Parasuraman consecrated the age old Sree Vasudevapuram Mahavishnu Temple. The striking factor of the temple is the fact that the presence of Goddess Mahalaxmi is also felt along with Lord Vishnu here. However, the presence of Goddess remains only for 8 days during the period of Akshaya Trithiya in the month of Vaisakha. During this time the goddess is worshipped in eight different avtaars. It is a pleasant and peaceful experience just visiting the temple.

Explore more about Tourism in Ernakulam