Situated in the heartland of Kerala, and covering an area of 3068 sq km, Ernakulam is the biggest metropolis and the center of industrial and commercial activities in the state. That is why it is often referred as the commercial capital of Kerala. The district has some of the finest attractions to mesmerize every visitor including one of the best natural harbors in Kochi which is also referred as the Queen of Arabian Sea. As per the history of the district it is one of the popular places of ancient days for the English, Portugese, Chinese and Arabs just for the immense industrial activity occurring in region and specially since it was an main area of trade and commerce.

Ernakulam is a perfect combination of tradition and modernity. Be it the traditional Fort Kochi or the beautiful Chinese nets, the age old spice markets or the cosmopolitan ambiance one can find it all in the buzzing city roads of Ernakulam. 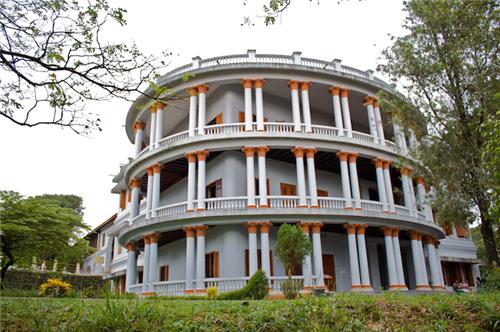 It may be noted that in ancient age the name of the city was “Rishinagakulam” but it was later changed to Ernakulam from the word Erayanarkulam which literally means the abode of the Hindu God, Lord Shiva. Ernakulam is a place with multiple tourist attraction starting from historical places to religious pilgrimages, metropolis interests to natural extravaganza.

Hill Palace Museum
Located on Ernakulam Chottanikkara route lays the beautiful Hill Palace which was known to be the residence of the Royals of Kochi. The most attracting feature of the Palace is its finest architectural brilliance not only in the exterior of the Palace but also in the 49 buildings built in it. The Kerala style of architecture is followed here. The Palace is surrounded by 52 acres of land with parks and horse riding facilities. Apart from this the Palace holds the Heritage Museum of Kerala, the largest one in the state where one can find inscriptions, murals, coins, manuscripts, paintings and even sculptures which truly are amazing and a place worth a visit. Read More

Madhavan Nayar Foundation
For a travel to the ancient roads of the history of the state one can visit Madhavan Nayan Foundation based at Edappally at a distance of nearly 8km from the center of Ernakulam. The place holds a beautiful Museum displaying the history of Kerala and its existence through various episodes from the ancient age to the modern years. There is a host of collection in regards to paintings, sculptures and even visual arts.

Alwaye
This is a beautiful location at a distance of 21km from the heartland of Ernakulam. River Periyar flows through this place and often visitors prefer swimming in the river waters and spend an entertaining time here. One of the most important functions here is Shivratri where on the banks of the river, a colorful celebration is organized to offer prayers to Lord Shiva. Devotees are known to spend the whole night here on that particular day.

Kaladi
This is the holy birthplace of Adi Sankaracharya who was believed to be a huge philosopher of the ancient period of 8th century. There are temples in this region of Sri Krishna, Sri Ramkrishna, Sharada Devi and Sri Shankaracharya. Read More

Bolgatty Island
In 1744, it is believed that it was the Dutch people who built in a magnificent Palace at this location and named it as Bolgatty Palace. Later though the palace was taken for usage by the British Officers, after Independence it was considered as a property of the state and today KTDC has its hotel run in this location. Read More

Kodanad
Situated on the southern banks of the beautiful river Periyar lies the gigantic elephant training center, the biggest one in Southern India. A small zoo is also located here with limited wild animals.

Bhoothathankettu
At a distance of 50km from the heart of the city this is a beautiful location to relax and refresh in the backdrop of scenic forest beauty and a dam site with options for couple boating.

Chennamangalam
Based on the north eastern side of Ernakulam this is a geographical attraction with massive scenic excellence. River, inlets, hillock and plains are all found here. Surrounded by rivers on 3 sides this was the abode for famous and important personnel of the court of the Raja of Cochin. Read More

Jewish Synagogue
The quint charm of Matancherry gets double-fold with the Paradesi Synagogue which is also known as Jewish Synagogue. In 1568 the Synagogue was constructed but destroyed by the Portugeese in 1662. However, it was rebuilt after two years with active interest of the Dutch people. It has glass chandeliers of the 19th century from Belgium, 18th century Chinese floor tiles, slender glit columns and many interesting objects that are sure to be considered as a precious collectable. A copper plate with the scripts from Maharaja of 4th century in Malayalam is also present here which adds to the attraction of the place. Read More

Willingdon Island
Named after the British Viceroy of the country, Lord Willington this is a beautiful man-made island between Ernakulam and Mattancherry and fenced with the fascinating backwaters unique of the state. This is one of the important and famous island with a number of 5 star hotels and industrial houses present in it. Read More

Kumbalangi
In the western region, facing the fascinating backwaters of Kochi lies the beautiful village Kumbalangi, which incidentally is the first eco-friendly village and a wonderful tourist destination of the country.

Marine Drive
A popular hangout place for the locals as well as the vacationers, this place is a perfect picture of cosmopolitan life with corporate office, luxurious hotels, restaurants and cafes in the backdrop of the scenic and spectacular backwaters of the state.

Cheena Vala
Cheena Vala are nothing but the Chinese fishing nets which can be viewed in Cochin Harbour hanged on bamboo steaks or other teak posts and used by fishermen till today. The view of the same at the time of Sunset is truly a sight to be cherished.

Apart from the mentioned destinations there are some widely believed religious places spread across the district of Ernakulam. Some of these places are

Chottanikkara Temple
This is a beautiful temple enshrined with three faces of Goddess Bhagavati, in the form of Saraswati, Bhadrakali and Divine Durga. The temple is believed by a lot of devotees and it is considered as one of the most religious places in the area. Thousands of people come here round the year to offer prayers and specially to celebrate the festival of Makam Thozhal during the months of February and March. Read More

St Francis Church
Built in 1510 AD, this is a beautiful church built by the Portuguese people, which coincidentally was also the first Church built in the country by the Europeans. It is believed that Vasco Da Gama was buried in this place which, however, was taken off by the Portugeese people in the later years. Read More

Pazhur
Near Piravom lies the beautiful place Pazhur which has became pretty famous among the vacationers only because of the presence of the temple of Lord Shiva which is known to be around 1800 years old on the banks of River Muvattupuzha River. The river is believed to have change its course on its own reaching the temple and, thus, saving the divine place from being washed away.

Malayatoor Hill
Dedicated to St Thomas, at an elevation of 609m lies the stunning Catholic Church on Malayatoor Hill, which attracts thousands of devotees every year during the annual festival time of Malayatoor Perunnal in the month of March.

Shopping at any destination is one of the primary attractions for almost every kind of people. In Ernakulam, apart from getting mesmerized with the beauty of the district, one can spend quality time purchasing some of the best items in the popular markets of the city.

MG Road
One of the most widely visited and famous place in Ernakulam is the MG Road or Mahatma Gandhi Road which is also known as the lifeline of the city. The place is the prime commercial area with restaurants, garment shops, jewellery shops and host of other utility items.

Antique Market
It is believed that when Jews were returning back to Israel they left a lot of their dwellings which were carefully stored only to become some of the most demanded products in the exclusive antique shops today. Situated on the Jew Street, this place is one of the popular stopover for the tourists.

Spice Market
The exclusive Spice Market in Matancherry is one of the best visits if the interest lies in lovely cooking and tasty dinning. Filled with the beautiful aroma of ginger, cardamom, pepper and cloves this place is a chef’s paradise.

For traveling in Ernakulam, the state has some of the best facilitated tourism offices which can be contacted for almost any kind of information regarding the district. The details of this offices are

How to Reach Ernakulam

The best part of Ernakulam is the fact that the district is well connected and can be reached through all major medium of transportation. For air travel, the nearest International airport is Cochin International Airport at Nedumbassery. The distance from airport to the city can be easily traveled through cab services available around the airport. For rail travel, the communication is well established with Ernakulam Junction Railway Station which accommodates connectivity with all major places of the country. In case of road connectivity, the district is blessed with excellent roadways and also it has maximum number of vehicles. With three major highways passing through the district, NH-17, NH 47 and NH 49 the district connects various major cities of the state and beyond. Apart from this there are two ferry stations in Ernakulam, one near railway junction and the other near High Court. Several popular tourist places can be reached through daily frequent ferry services from here.

Ernakulam can be visited any time but the best climatic conditions prevail in the winter months for tourist visits. The weather during the summer season is usually hot and humid with maximum temperature hovering around 370C. From July to September monsoon prevails with heavy rainfall in the zone restricting outdoor activities a little. The winter months experiences the best weather with temperature shifting from 170C to 330C.The climate during this time is much pleasant with cool breeze flowing and helping the tourist enjoy the district at its best.