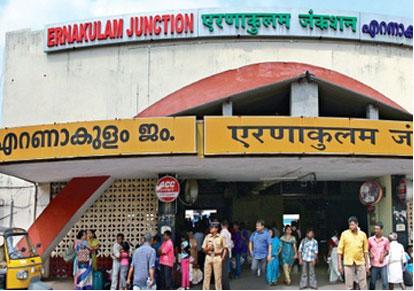 Based in the heartland of the Indian state Kerala is the most prominent and popular Ernakulam district. Consisting of a considerable 12% population of the whole the city is considered to be a populous one with a huge footfall from vacationers as well. The district has a significant presence as an extraordinary tourist location for its pious religious spots, posh commercial zones, cosmopolitan lifestyle, excellent environment, serene nature’s beauty, lovely coastal areas and harmonious backwaters. Apart from tourists, the district provides a prominent and beneficial site for trade and commerce which in turn makes it an ideal business location for different business houses. So to provide a considerable support to the business and economy of the district, to boost the tourism industry here and to facilitate the natives of the district, the transport services in Ernakulam has been given special attention with initiatives to strengthen it at the best.

Transport in Ernakulam can be divided into four major zones, airways, railways, roadways and waterways. To strengthen these four ways was a mammoth task but the same has been almost successfully done by the Government Transport Department and multiple well reputed private transport companies. However, with the active support and services from all, the transportation facility in Ernakulam is one of the best and the easiest activity. It may be noted that the district has the maximum number in regards to Regional Transport Offices in the whole state. At present Ernakulam has nine such offices based at Ernakulam Ho, Muvattupuzha, Thripunithura, Perumbavoor, Aluva, North Paravur, Mattanchery, Kothamangalam and Angamaly.

Ernakulam district has good connectivity through airways. There are two prominent airports in Ernakulam, the Old Cochin Airport and the latest Cochin International Airport. The latter is considered as the fourth largest airport in the country with connectivity with almost all major cities and states of the country. A lot of well known and popular airline companies hjave their operations here. Apart from this almost all major Asian countries can also be travelled from here in quite cheap rates.

There is no doubt in the fact that railways are the cheapest and the most convenient mode of journey and opted by majority of the population to travel distances in the country. Ernakulam district is no different and that is why a major emphasis has been given towards the betterment of railways here. The district has a total of 17 railway stations in the district of which the most prominent ones being Ernakulam Town and Ernakulam Junction. Based under Thiruvananthapuram Railway division and operating under the Southern Railway zone, these two stations serve as a major point of connectivity. Locally these two stations are named as Ernakulam North and Ernakulam South. Apart from this there are other railway stations at Angamaly, Aluva, Edapally, Thripunithura, Cochin Harbour Terminus, Mulamthuruthy, Chowara, Karakutty, Nettor, Kalamassery, Mattanchery H, Kumbalam, Piravom Road and Chottanikkara Road. Though almost all stations have facility to accommodate long distance trains but the majority of them pass through Ernakulam Junction. It has six platforms to accommodate such trains. It has a train care unit too for the benefit of rail transportation.

Kerala State Road Transport Corporation is the major bus services in Ernakulam district. It is by far one of the most comfortable and cheapest modes of transport for traveling both longer and shorter distances. Having more than 5950 buses it travels through more than 5000 schedules at reasonable rates. The organization has multiple styles of buses to cover various destination. There are City buses, City fast buses, low floor buses, double dekkers, mini buses, fast passenger buses, super fast, super express, deluxe as well as ac and non ac luxury buses.

Apart from this there are various private bus companies which have comfortable buses in several routes across the district. They have luxurious travel arrangements in various places across state.

The best way of traveling in terms of independence as well as comfort is the car services in Ernakulam district. In the district there are several popular and reputed car hire agencies which have availability luxurious as well as economical cars. One can easily book a car to visit the exclusive tourism places in and around the district. Even for corporate traveling there is availability of cars according to the necessity of the companies. The rates of car hire companies depend on the requirement of the customer like number of kms or days it needs to travel or the type of car the customer is ordering for. However it is always beneficial to discuss the requirements with two or more car hire companies to have an idea on the cost of travel. After this one can easily bargain with the hiring companies to fetch a best deal. It is important to be aware of the reputation of the car hire agencies before booking for services.

Apart from car hire there is another mode of road transport which usually travels smaller distance but to the interiors of the district and that is the auto-rickshaw. One can hire these rickshaws to travel all those places where buses cannot travel. They can go by the meter or can travel regular roads on pre-decided fares. Personal two wheeler vehicle is also much popular in the district so the roads always remain much crowded with motorbikes and scooters.

Based on the delta region of two famous river of the district Moovattupuzha and Periyar, the district has one of the major transport options through the waterways. The district is filled with multiple rivers and lagoons the reason why small ferry services or boat services is never an issue.The boat services are usually 100 seaters and the boats are made of wood and steel. The largest port in the western coastal area is the Cochin port with a new one in Vallarpadam coming with added advanced facilities. The State Water transport Department operates this ferry services which connects Ernakulam to other districts. The popular routes through inland waterways within Ernakulam are Ernakulam-Fort Kochi and Ernakulam Vypeen, Mattancherry, W. Island etc. It is a conscious effort to reduce the road traffic and help people reach places faster and with less costly transport.

Traveling in Ernakulam district is not at all a tedious task with so many options for travelling. One just need to know about the various routes and modes of travel and then choose the preferred one.